I had some unfinished business.
If you recall, I only managed to snag 1 lousy baseball (game foul ball) on 5/09/09.

It was time to shine.  The Marlins were in town.

I arrived at the ballpark early (as usual) and wandered around the stadium.  I didn’t want to get a table at Friday’s and pay $15 for a sandwich and coke, so, I went elsewhere.
Besides, the Brewers are running a promotion May 12-14.  It’s called “Spring Madness.”
All tickets $28 and less are 1/2 price and hot dogs and small cokes are just a buck.
More on the hot dogs a bit later.

My 1st ball of the day was via the glove trick in the Brewers bullpen.

Ballhawk Shawn and his awesome Mom had a table reserved out on the Friday’s patio.  When I went to say “hello” he told me he had tried to use the glove trick on the ball but to no avail.  He said, “go for it…you’re the pro.”  Or something to that effect.

Ball #2 arrived (caught on the fly) off the bat of Brewers CF MIKE CAMERON.  I really dig Mike Cameron.  He’s awesome to the fans and has one helluva golden glove in centerfield.
Thank the Dear Lord we didn’t trade him to the Spankmees.

Brewers bullpen catcher MARCUS HANEL started walking out to the Brewers bullpen with starting pitcher Yovani Gallardo.  It appeared as if they were about to do a bullpen session.  When Marcus noticed me standing above him, he tossed me Ball #3.  Then, he yelled up to me, “hey Happy, stop switching.”  (He was referring to me switching out of my Brewers gear and into the opposing team’s gear for BP).  I asked Marcus if he was trying to pay me off (tongue in cheek).  He responded, “you wouldn’t wear Bears stuff to a Packers game!”  To which I responded, “if I was chasing footballs, maybe!”

I started wandering a little further than I should have and noticed a baseball lying in the visitor’s bullpen over in right field.

So, I sat down in the bleachers and readied my equipment.
The ball was about 2 inches off the side wall of the pen.  So, I had to actually nudge it away from me and the wall.  When it was in place, I dropped the glove on it and had Ball #4.

The Brewers portion of BP ended with a Bill Hall BP homer snagged on the bounce for
Ball #5.

Near the end of the Brewers BP, a guy came up to me and asked me if I was the guy always on ESPN for catching baseballs.  He said he recognized my shirt from “THE CATCH.”

If you haven’t seen “THE CATCH,” check it out…

The Marlins were now stretching on the field.  So, I headed down the left field line to snag a warm-up ball.

Marlins CF CODY ROSS was finishing up his warm-up throws and underhanded me the ball.  It was one of the worst tosses I had ever seen.  Needless to say, someone else claimed the ball.

To his credit, Cody was sincere in his apology, saying, “sorry, man.  That was a bad throw.”

He started signing autographs.  When he got to me, I put out my fist and said, “no problem.  Next one.”  He responded, “I got you, man.”

He ran out to centerfield to take some fungo practice.  So, I went to centerfield as well.
He fielded one and I asked for it.  He looked up at me, recognized me from a few minutes earlier, and lobbed it to me for Ball #6.  If I would have waited too long, I would have lost my opportunity.

Ball #7, ironically enough, came off the bat of the above pictured CODY ROSS.  That ball was caught on the fly.

Ball #8 was snagged on the bounce off the bat of JORGE CANTU.

Ball #9 was tossed up to a group of fans near me.  None of them had gloves and they muffed it.  The ball bounced away and I ran it down.  I have no idea who threw this ball.

Shortly after, I heard a voice yell out to this guy—————————>
Marlins relief pitcher KIKO CALERO.
It was Ballhawk Shawn and he was standing nearby.  Kiko looked up at me, so I waved.  Shawn was standing back and behind some railings.  It was hard for the players to see him standing in this position.  Shawn claims that spot is gold for him, so, more power to him.

A minute later, Kiko fielded a baseball.  Shawn, once again yelled to him-this time, asking for the ball.  Kiko looked up at me.  So, I held up my glove.  He lobbed the ball to me for #10 on the day.  Shawn did all the work…I didn’t say a word.  I just don’t think Kiko could easily see Shawn where he was standing.

I moved back to right field.

Marlins pitcher BURKE BADENHOP was fielding BP.  When he fielded the next baseball, I yelled, “Burke, ball please!”  He snapped his head toward me and fired me Ball #11.

It was definitely a reward for knowing his first name.  Anyone can read a name off a jersey back.  You have to know the first names!!

The Marlins were winding down their portion of BP.  So, I headed over to their dugout.  I snagged Ball #12 via an unknown rapid fire dugout roll.  You know the one…where out of nowhere, a ball comes popping out of the dugout and onto the roof.

I headed back to my seat.  On the way, I picked up three (3) dollar dogs and one (1) dollar coke.  Ugggghhhhh…extra pickle relish.  No condiments.

Right before the game was about to begin, my wife and kids arrived.

My view of the game… 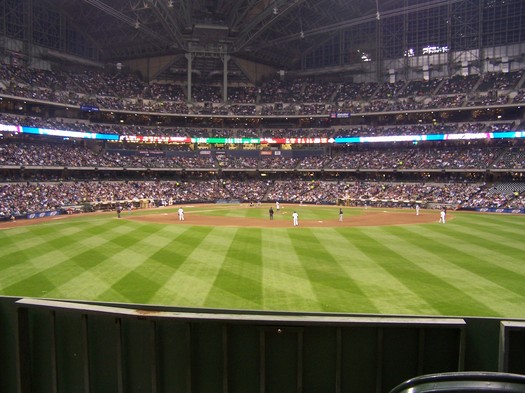 …I love that seat.

Two homers by Prince Fielder (neither playable for me) propelled the Brewers to a 6-3 win.

In the bottom of the 8th inning, I relocated to the Marlins dugout (6th row).  I tried to get Home Plate umpire Angel Campos to toss me a ball but he just ducked into the umpire well and out of sight.  It seems I never have any luck with the ump when the Brewers win.  It’s just too loud in the stadium for me to get their attention.

The Marlins relievers were now exiting the field.

I noticed that LEO NUNUZ had a baseball tucked away in his glove.  When he got close enough, I asked him for it.

About 20 feet behind him, there was another group of relievers.  When they approached, one of them flipped me Ball #14.

I’m not positive who threw the ball to me.  I was a bit surprised.

Me at the dugout after the game…

…with my fourteen (14) baseballs and my extra-small 1990’s Marlins BP jersey.

After the game, on the walk to my vehicle, I ran into this lovely little lady sporting a very familiar shirt…

…her name is Allison and she’s a nursing student.  Allison officially rocks.
Sorry boys, Allison is dating a med student.  But, for supporting “The Happy Youngster,” she was given a baseball.

Back with a vengeance!