Remember the Carlos Quentin home run hit back on 8/04/09 that bounced off the metal roof and landed on top of the shrubs at U.S. Cellular Field??

Does this refresh your memory (photos taken August 4th, 2009)… 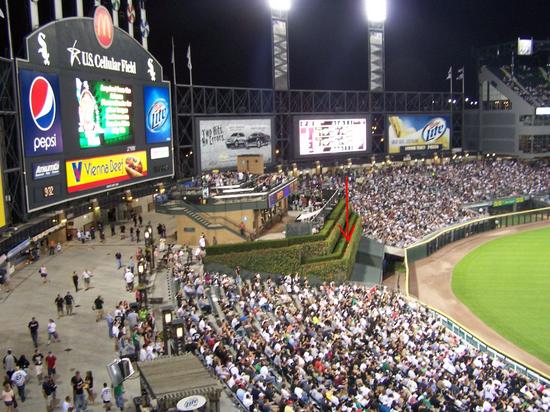 …???
(check out the links above for a quick refresher)

More on this later…

Radar showed a massive green blob of rain heading straight toward Chicago.  After monitoring the green blob for around 7 hours (with no change), I left work at 1pm and headed to Miller Park.
At Miller Park, I was going to meet up with two good young ballhawks named Casey & Matt.  They’re regulars at Miller Park and they’re both cool dudes.  Casey has his very own ballhawking blog that you can check out by clicking here.  From there, we were all going to pile in my truck and head down to the Waukegan train station.

After approx. a 1hr. drive, we arrived at the train station.  Unfortunately, we missed the 2:10 train because the drive-thru at White Castle took WAY too long.  Oh well…we would catch the 3:10 train.

There was about an hour to kill…

…so, we played some catch. 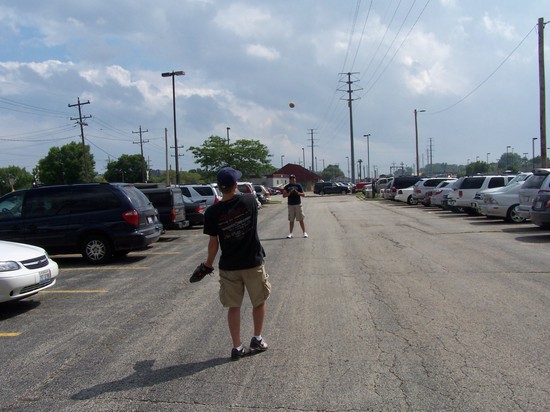 …no worries.  I brought a few extra.

Finally, we were on the train to Chicago… 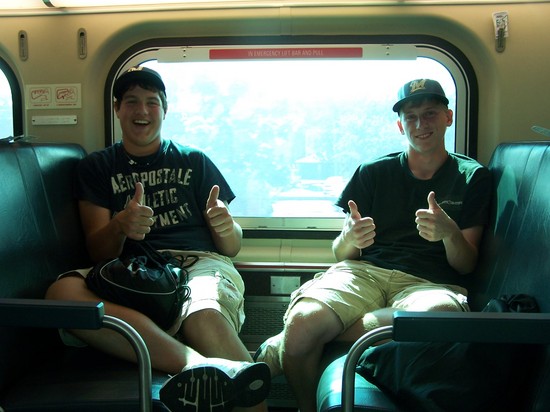 After a quick ride on the Red Line subway, we arrived at US Cellular Field.
We wasted no time before grabbing our spot in line… 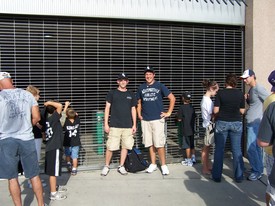 That’s when a young man approached me and said, “Nick?”

I turned around and quickly realized it was Alex from the Ballhawk League.
Alex is 13 yrs. old and has a great ballhawking future ahead of him.
Check out Alex’s blog by clicking here.  He’s one cool kid. 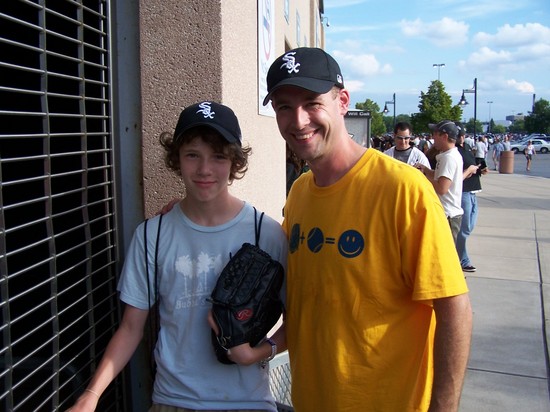 When the gates to the stadium opened at 5:30 pm, all four of us sprinted up the long concourse, flashed our 100 level tickets to security and entered the seating area.

Would there be BP??

YES!!  The BP GODS have spoken!

When I saw the field was occupied by numerous Sox players, I discovered that I had an extra gear.  I ran all the way down the 1st baseline, around the rightfield foul pole, behind the batter’s eye and eventually, made it to the left field bleachers.

The 1st thing I did was to scan the moat for any glove-trick opportunities.  I spotted one out in left-center.  After about 10 seconds, I reeled up Ball #1.  As I was reeling it up, an unknown Sox player hit one directly
to me.  My glove was dangling in the moat at the time, so, all I could do was stick out my barehand.  It ended up bouncing off the warning track and then bouncing off my barehand…ending up back on the field.  Luckily, White Sox reliever Randy Williams took notice of my effort and rewarded me with the baseball via toss-up for #2.

When I removed the baseball I had just glove-tricked, things took a turn for the worse.
The rubber band was dangling from one side of the glove…it had snapped.  Oh no!!

As luck would have it, the White Sox were finishing up with BP and were running off the field.  I knew I would have about 2-3 minutes before the balls would be flying once again.

Quickly, I removed the old rubber band and grabbed a new one from my backpack.  I bit it to make one long rubber string (I have to do this so I can string the rubber band through and around the stringing in my glove) and tied it through.  After a 3-4 minute delay, I was back in business.

Things started to happen really fast from here on out.

Ball #3 was snagged on the bounce off the bat of Miguel Olivo.
Ball #4 was then glove-tricked out of the moat.

Here’s a blurry shot of me reeling in #4… 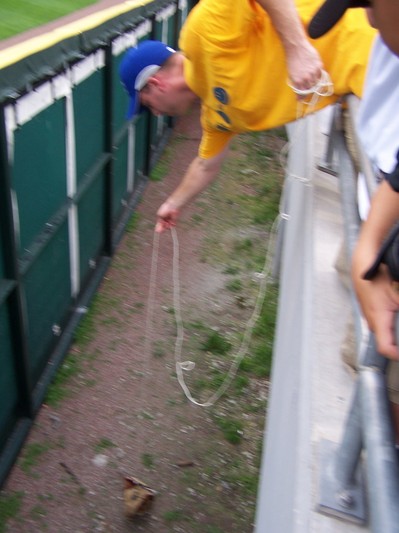 A few minutes later, a ball was hit out to deep center.  Royals coach Rusty Kuntz (cool name, huh?) waddled out to retrieve it.

Just when I let my guard down for a second and looked away, I saw the Rusty ball descending down toward me.  In a defensive reaction, the ball clanked off my glove and fell into the moat.  Dammit!!!  I looked a little foolish missing that ball.  Whatever, I would glove-trick it.  Or so I thought.  Out of nowhere, came two brothers with a glove-trick of their own.  They were quicker than me to get their glove-trick lowered, so, I let them go for it.  After they fumbled with it for 4-5 minutes, I told them I would take care of it.  After about 30 seconds, I reeled up Ball #5.

Ball #6 came off the bat of
BILLY BUTLER.

When it was hit, I hurdled three rows of bleachers, ran over about 5 feet and put my glove up as high as I could reach.

A new group was taking the cage.  So, I scanned all the moats…nothing.  I had a weird feeling about the gap behind the centerfield fence.  Nobody was paying any attention to that area.
When I peered over the railing, this is what I saw…

When I was putting #7 in the backpack, the dude pictured to the right lifted one high into the air.  I ran through a few aisles, jumped over a few rows of bleachers and made the grab on the fly.

I was locked in.

A bunch of lefties were now hitting for the Royals, so, I moved to right field.  It was crowded.

That’s where I met a really cool guy named Ben.
Ben asked if I was “The Happy Youngster.”  I told him I was and we began to chat like we knew each other for years.  Ben was wearing this really slick Dan Quisenberry Royals jersey.  Oh yeah, Ben has a collection of jerseys that would blow your mind.  According to “jerseyboy” (his handle on the mlblogs network), he has over 1500 jerseys!!  Holy crap!  I told Ben I would catch up with him after BP (picture to follow).

After about 6-7 minutes, MIKE JACOBS launched one in my direction.  I scrambled through the aisle like my *** was on fire.  I found my spot and made the snag on the fly.

Booyah…#9.
As an added bonus, it was an HHH Metrodome commemorative baseball.
Woohoo!

I *needed* to get to double-digits to break the Coghlan curse.
(if you don’t know by now, don’t ask)

As BP ended, the rain began to fall.
There truly is a BP God…I swear.

As the majority of the stadium attendees sought refuge, I relished in it.
I’ve mentioned before – roofs are overrated.  I enjoy an occasional rain delay.

A rain delay is what I got… 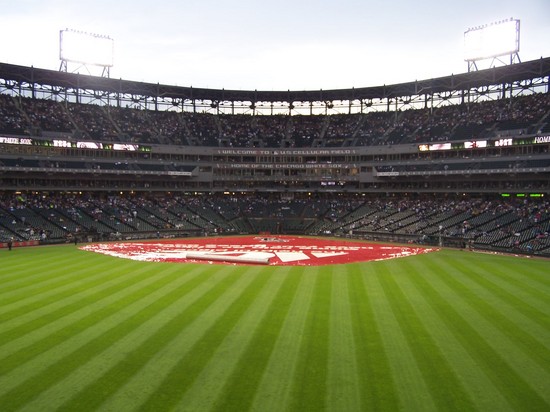 &
nbsp;
During the delay, we wandered around the stadium. 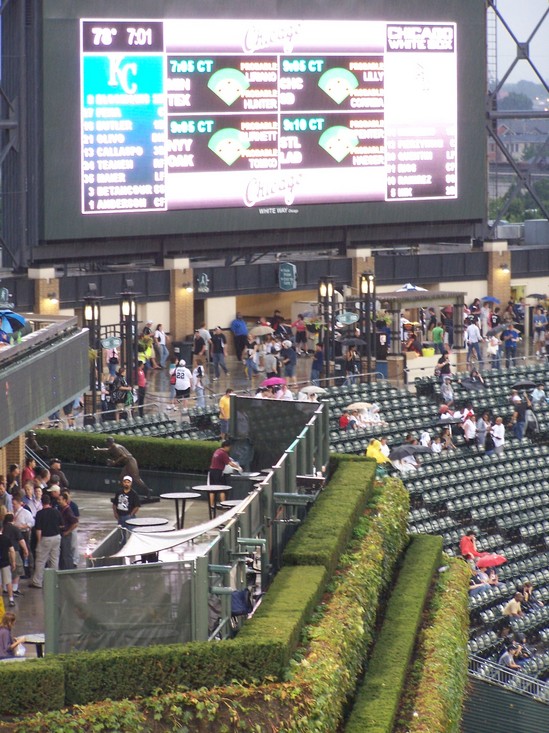 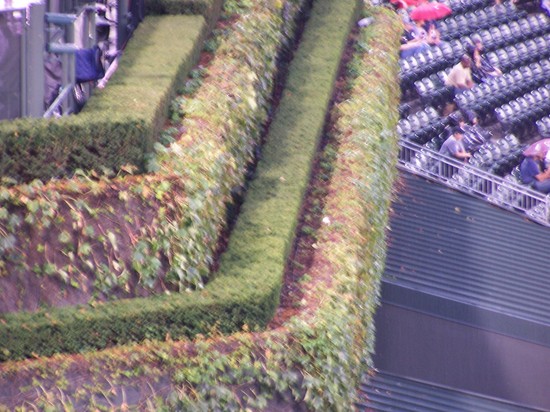 I had to get that ball for the following reasons:

I just *had* to figure out a way to get that ball.

After about an hour rain-delay, the weather began to clear.
That’s when a rainbow appeared above US Cellular Field…

In the top of the 2nd inning, Yuniesky Betancourt hit a home run into the White Sox bullpen.  Would it be glove-trickable??  Alex (who was sitting next to me in the 2nd row above the Royals dugout) and I were about to find out.  So, we raced out to left field to take a look.

When we made it to left, we grabbed a couple seats in about the 7th row.  When the time was right, we made it down to the railing of the Sox bullpen.

Here was my view… 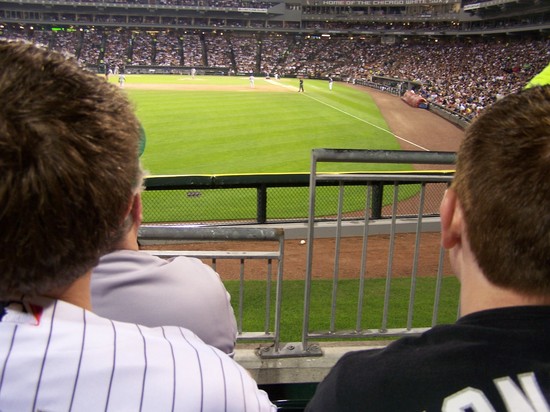 If that would have stayed at the rear of the bullpen, it would have been glove-tricked.
No doubt about it.

Alex and I stayed in the 7th row behind the bullpen.  When the Sox 1/2 of the 2nd rolled around, JAYSON NIX launched one straight in our direction.  I started to dart down the staircase.  A fat guy in the 5th row acted like it was coming straight at his head.  He just froze in the aisle and put his arms out.  After I maneuvered around Fat-Man, I made it down to the front row.  As I extended my glove-hand all the way out over the railing, the home run ball bounced off the bottom of the rear wall of the bullpen and bounced back toward the front of the pen, coming to a rest about 1 foot away from the Betancourt home run.  I had just come about 6 feet from a game home run.  Damn.
Immediately, Sox Coach Juan Nieves ran out and grabbed the Nix home run.  In the process, he kicked the Royals home run and made a gesture with his hand, pinching his nose as if something stunk.  Alex and I were both in the front row waiting for the toss-up.  Nieves launched it over our heads.
Where did it land, you ask??  Directly in the seat Alex vacated in the 7th row.
Double-damn…the kid took it hard but I told him he made the right decision by getting to the front row.  There’s just no way of knowing that ball would have been tossed 7 rows up. 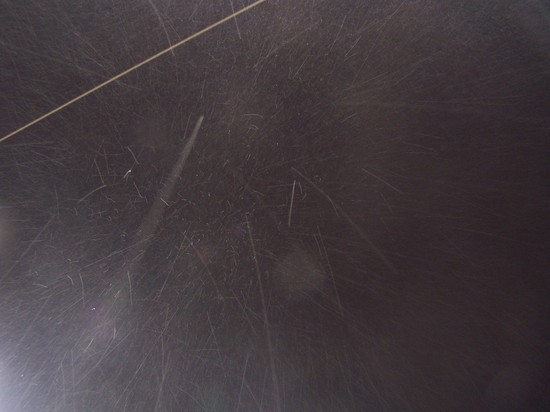 …the White Sox defeated the Royals 8-7.

After the game, I tried for an ump ball from Chad Fairchild…with no luck.

I wandered over to the Royals dugout for a toss-up ball…with no luck.

That’s when I met back up with Ben (aka-jerseyboy).
Here’s Ben and I after the game by the visitor’s dugout… 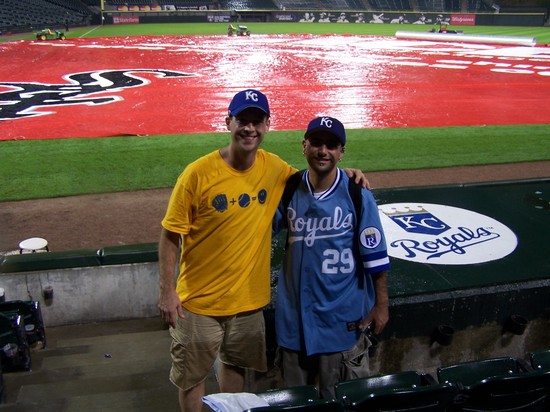 …Ben, I hope we cross paths again soon.  It was a pleasure meeting you.

I said my goodbyes to Alex (and his Dad) and told my friends I was determined to end the Coghlan curse.

For various reasons (that should be obvious to most), I cannot provide exact details.

I can say this:

If you see me, ask me about it.

Here I am with Career Game Home Run Ball #52…

An injury incurred along the way…

As for the ball… 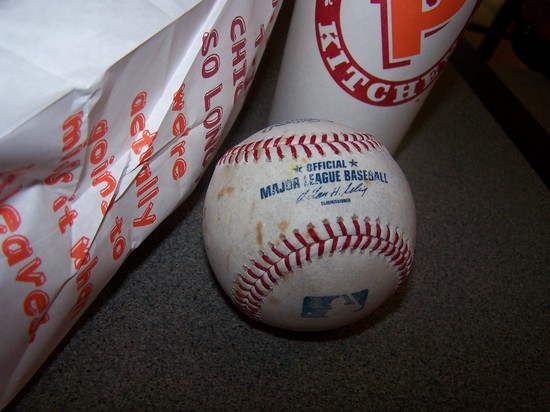 …it was starting to deteriorate and had a few brown spots on it.

But, at least the sweet-spot was clean…

…with the game home run ball in the front.