It was blistering-hot in Milwaukee.  I had not even started to ballhawk and I was already drenched in sweat.  Disgustingly drenched.

If you don’t know the name, you will.  He’s an absolute hitting machine with a bright future.

How I snagged #3 was actually a bit interesting.

It landed (on the fly) in the Toyota Tundra Territory out in deep right-center field.  It then bounced out of that section and landed on the concourse below.  It rolled about 10-15 feet (with me giving chase) into a restricted, gated-off area.  I thought it was lost before it rolled back out into the concourse where it was claimed.  I have the slight pitch/slant in the concrete that leads to a drain to thank for it rolling back to me.

The Brewers were finishing up their portion of BP when Brewers ace
YOVANI GALLARDO ————————————————>
fielded a baseball.  I yelled for the ball and he
turned and looked up into the bleachers.  He wasn’t looking at me.  So,
I waved my glove and yelled again.  I was standing in about the 15th
row of the right field loge bleachers (2nd level).  He spotted my position and
lofted the ball to me.  It fell about 4 rows short, but, I ran down and easily claimed BALL #4.

The Twins were now on the field.

Soon, Twins RF MICHAEL CUDDYER hammered one in my direction that I caught on the fly for BALL #5.  When I inspected the baseball, it appeared to have once been a gamer that was retired to the BP bucket.

A few more baseballs were hit up in my area but it had gotten crowded and hard to move.

NOTE:  For those that think Miller Park is an easy stadium to ballhawk in, guess again.
Try ballhawking in a stadium that averages nearly 40,000 but only opens up 1 & 1/2 hrs. before gametime.  Not to mention, there’s no real spot at Miller Park that’s open and easy to roam around in.  Strict ushers/security add insult to injury.

The Twins righties were finished hitting.  I headed back to right field.

When I made it out to right field, I noticed Twins pitcher FRANCISCO LIRIANO was standing in centerfield shagging BP.  I congratulated him on the victory the night before.  When the next baseball was hit to him, he turned and tossed it to me for BALL #6 on the day.
When I inspected it, I noticed it was almost brand-spanking new.  Not as new as the Cuddyer BP homer I had caught the day before, but, almost.

In the next 15 minutes, I managed to snag 3 more baseballs (all on the fly) from the following players…

JASON PRIDIE – BALL #7 (given away to a young Twins fan)

That was it for BP.

Did I mention it was hot?? 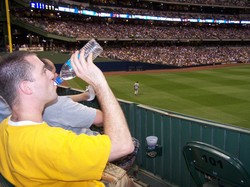 During the game, a very special family stopped by my seat to say “hello”…

Another Miller Park regular stopped by the section…

…the young man’s name eludes me at this time.
In his hands, he held the newest addition to his growing memorabilia collection.
A Jason Kubel gamer bat cracked during BP and given to him directly from Mr. Kubel.
Cool stuff.

I didn’t mention it in my last game blog (6/23/09), but I had the chance to formally meet another fellow member of our BALLHAWK LEAGUE.

Big Glove Bob was in the house.

For those of you who don’t know, Bob is a diehard Twins fan who has gained notoriety for sporting an oversized glove at the Metrodome.

Bob’s blog tells it like it is and is always a funny read.
If you haven’t already, check his blog out here.

…we talked at length.

What a great guy!

The game ended with the final score:

Only 8 are shown (1 was given away to a small Twins fan). 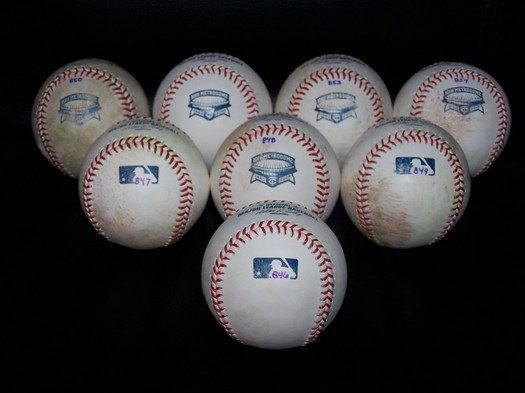