So, the Milwaukee Brewers On Deck event was a success.

Apparently, people started lining up @ 5am in the freezing cold so they could guarantee a spot in some of the autograph lines (Brewers fans are nuts-me included).

Trevor was officially introduced to Milwaukee. 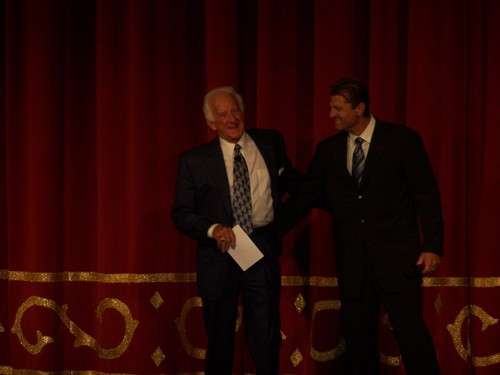 Trevor Hoffman brought out on stage by Mr. Baseball-Bob Uecker to a packed auditorium at the Riverside Theater.  They concluded the show (in true “closer” fashion) with his introduction…and played “Hell’s Bells” to him walking out.
Awesome!!

To which Trevor responded, “Coach Macha, Owner Mark Attanasio and former teammate Mike Cameron all showed a lot of interest in me coming to Milwaukee.  ‘Cam’ said Milwaukee’s a great place to play and the fans really come out to support the team.” 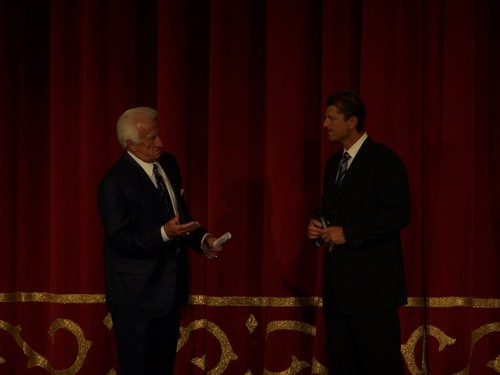 Trevor about to tell Uecker that he’s “pumped about being the new kid on the block.”  Trevor also said, “it’s like being re-energized.”

Trevor talking about his new teammate Tony Gwynn, Jr.  He said, “the first time I saw Anthony, (we called him Anthony back then) he was about 10 years old and about this big.  Now, he’s a grown man and his talent has developed.” 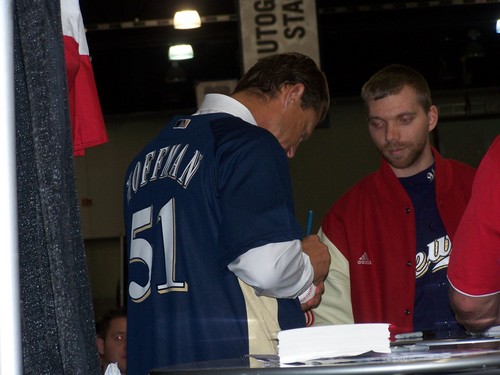 Trevor donning his new Brewers jersey…signing a baseball for a fan that has one sweet cow-lick.

Trevor inking another baseball…damn, he looks good in that uniform! 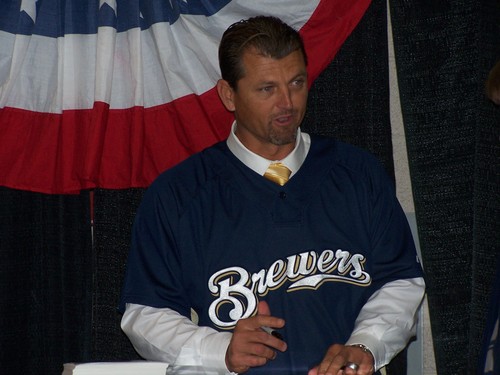 It’s about to be Trevor Time in Milwaukee!!

Here you go young man…one signed baseball from the greatest closer the game has ever seen.

Trevor with one of his newest fans…(not the Happy Youngster).

Man, I can’t wait to see this guy run out of the pen for the first time!!

The day also included the introduction of a few of the Brewers newest coaches.

Lots of experience on this staff.  Not pictured is new Manager-Ken Macha.

Here’s a picture of the young stud signing some autographs…

And remember the three game home run baseballs I wanted to have signed by Prince Fielder?

Well, we were only able to get one signed, so I chose the one from July 7, 2008 to be the one.  We asked him to inscribe “97th career home run” next to his signature.  He asked a nearby volunteer how to spell the word “career.”
Hey, at least the guy can play baseball…!

The other two game home runs from Fielder will have to wait for another day to be signed.

All in all, a great day.

Tonight (Jan. 23rd), here in Milwaukee, the Brewers will be holding their “Winter Warmup” event which will be emceed by Bob Uecker.  Many of the Brewers current roster will be in attendance.

The event tonight will be held at an historic downtown theater called the Pabst Theater.
I’m not getting my hopes up for tonight’s event…it seems like there won’t be many autograph/meet opportunities, just presentation type stuff.

But, the Brewers “On Deck” event, to be held Saturday, looks to be much more rewarding.

Not only will the Brewers be holding their Trevor Hoffman press conference, but they’ve also added Prince Fielder to the lineup of attendees.  Maybe they’ll hold a Prince Fielder announcement as well regarding his new 2-yr contract.

There is a long lineup of autograph opportunities available on Saturday.
I’ve combed through the list, I’ve checked the prices and I’ve looked through my collection.
Who do I want autographs from?

Get there early and get in line-everybody’s gonna want Ryan Braun’s autograph.  With only 250 autograph coupons available, they’ll be gone fast.  1 autograph ticket per person/per player.  I have to get there early with my daughter and we have to be among the first 250 people at the Ryan Braun autograph pay station.  I figure I’ll throw her little rear-end on my shoulders and make the mad dash!  Otherwise, she might get trampled by crazy Brewers fans like myself…shame, shame. 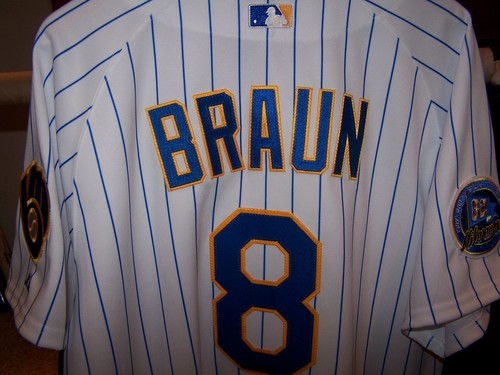 It’s my authentic Milwaukee Brewers retro Friday version of Ryan’s rookie jersey.  Straight from MLB and ready to be signed and framed…hopefully!!

Here’s what my daughter would like to get signed (at my discretion, of course-she’s only 3)…

Our Braunie Bomber poster…that would look sweet signed and framed, wouldn’t it?

TIP:  When you get an item signed by a player, tell him exactly what you want.  Also, tell him where you want the autograph.  That way, there’s no confusion and you won’t be letdown.

My next course of action (if I’m lucky enough) will be to jump into Prince Fielder’s autograph line.  Like I said earlier, only 250 autograph coupons are available per player/per person.  That’s not a lot when you consider there will probably be over 10,000 fans in attendance.

If I’m able to get those autographs, my day will be complete.

Of course, I’ll be taking a ton of pictures for a great big blog that will be coming, too.
Kaybee, I haven’t forgotten about you…you won’t be disappointed!

This story was just in the Milwaukee Journal Sentinel:

The Brewers will unveil their prize off-season acquisition —
all-time saves leader Trevor Hoffman — at their “On Deck” event next
Saturday at the Midwest Airlines Center.

Hoffman, who agreed to terms last week and was officially signed
on Tuesday, will be introduced at a press conference open to the public
at 10:30 a.m. That presser will take place on the WTMJ Stage.

The Brewers also announced the schedule for player autograph
sessions, which I’m putting at the bottom of this post. Some autographs
will be free, others will cost as much as $25. The team is making
available 250 autograph vouchers on the day of the event for each
player and coach. Cash will be the only form of payment accepted for
autographs requiring money.

All fans who attend the “On Deck” even will receive a free Terrace
Reserved ticket to any one of the three games against the Cincinnati
Reds, April 13 – 15. Advance tickets for the event are $15 for adults
and $9 for children (aged 2 – 14). On the day of the event, tickets are
$20 for adults and $15 for children.

Tickets are available in advance at brewers.com and by calling the
Brewers ticket office at 414-902-4100. A portion of the proceeds will
go to Brewers Charities and Make-A-Wish Foundation of Wisconsin.

Photo sessions with players and coaches will begin at 11 a.m. and
continue in 30-minute sessions until 4:30 p.m. Fans are advised to
bring their own cameras. Photos are free.

How sweet is that?

You can bet your bottom dollar that as long as my wife and I are not in a delivery room at the hospital, we’ll be front row for this!

One of my loyal readers…Kaybee, over at her S.D. Padres blog-Unfinished Business, will have plenty of pictures of one of her favorites-Trevor Hoffman after I return from this event.

It’s always a thrill to meet a true legend of the game…especially when he’s still playing!

Of course, I have to make time to stop by my favorite current player’s autograph table, too!
Ryan freakin’ Braun!

This event is going to rock…