I’ve always given away baseballs to deserving kids, but I’ve never given a whole day’s snagging away.  It seems I’ve always returned home with one.

I wanted to mix things up a bit.
Let the snagging tales begin…

5:25 – Relocated to barricaded area down the left field concourse.

5:48 pm – glove-tricked BALL #3 out of Brewers bullpen (while I had been reeling up ball #2, ball #3 bounced into the pen in nearly the same spot).

5:55 pm – Snagged a MATT DIAZ BP homer off the railing (it ricocheted off the front railing and spun straight toward me in the 3rd row at a million miles per hour…landing safely in my glove without touching the ground).

6:30 pm – glove-tricked BALL #6 out of visitor’s bullpen.
Immediately handed it to a nearby youngster.

8:25 pm – left the stadium (missed my wife and kids…needed some family time).

I was having a bit of bad luck during this Baltimore trip.  I was getting a little frustrated.
My fortunes would change on this day.

I headed out of my hotel around noon.
Based on my research, I set out on a mission to sample the finest crab cake Baltimore had to offer. 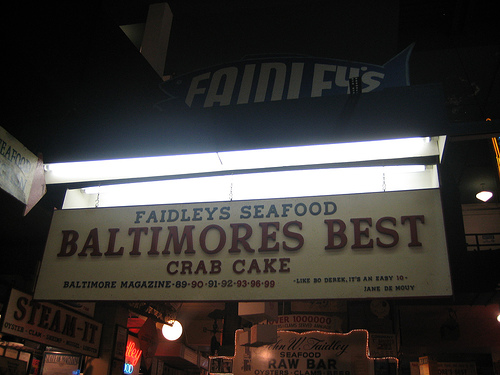 …so, I pushed open the door and jumped in line.  I didn’t know what to expect.

I looked up at the menu…

…the choice was easy. 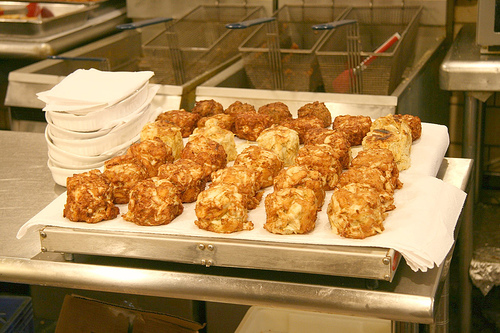 …I just asked for it between a roll.

Wow…absolutely delicious.  If you like crab cakes, you have to stop here.

While I was mowing down on my crab cake, I looked across my table and recognized this fella… 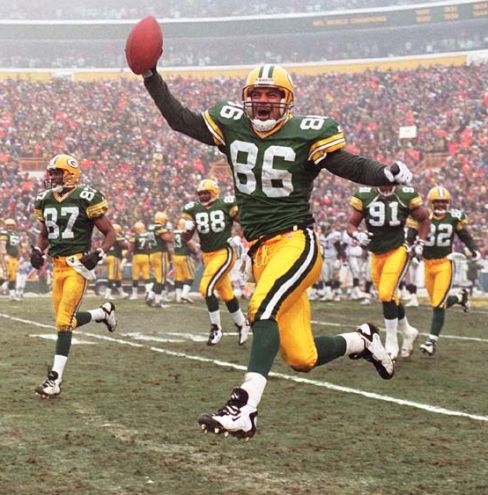 That’s former Green Bay Packers star wide receiver ANTONIO FREEMAN.
He was born in Baltimore, MD and starred for my hometown Packers.  What are the odds??

After
lunch, I headed down to the Harbor and bought my wife and kids a few
things.  I wasted a few hours down there…then headed to the park.

I
HAD to get the coveted season ticket style ticket for the game that
evening.  As you probably already know, this gets you in left field 30
minutes ahead of everyone else without that style of ticket.  It’s
ballhawking heaven when you have this type of ticket-no question.

After
about 1 hr. of wandering around the outside of the stadium, I found a
scalper.  I offered him $20 for a $9 ticket just so I could get into
left field.  Worth every penny.

Before the gates opened, I mingled…

…with a few regulars.

Pictured above:
a very friendly Camden Yards usher who’s known for saying “hit me” to
those waiting in line.  When the fan says “hit me,” the usher holds out
a handful of baseball cards in one hand and a spray bottle in the
other.  For your efforts, you get to pick a card out of his hand and
get a spray of cool mist to the face.  Ahhhhh. 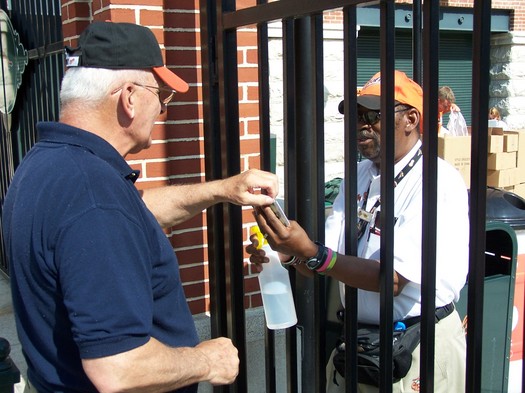 …by the name of Bob.

Bob has been attending games in Baltimore for a very long time.  He’s a great fan of the game and enjoys ballhawking, too!
He’s a retired baseball coach who, actually, once HAD a coach that was a former teammate of the great one…George Herman “Babe” Ruth.
Wow.

Bob, it was a pleasure talking baseball with you!

Finally,
the gates to the stadium opened up.  I ran to the right field standing
room only area to survey the scene.  A few lefties were taking BP!

So, I stayed put for a minute to see how it would go.
After
approx. 1 minute, I had BALL #1.  It came off the bat of FELIX PIE and
it was caught on the fly atop the elevated standing room only section.

FINALLY!!  A ball snagged on the fly.  My specialty.

I
noticed Luke Scott was hitting in the same group.  It didn’t take him
long to loft one to my right.  I ran to the end of the standing room
only section.  I had run out of room.
Wait!  There was time.  I
curled behind the right field bleacher seats using the small walkway
that runs in back.  The ball landed in the 2nd to last row and bounced
into the very last row of seats.  The ball was directly below me and
about 8 feet down.
The quickest way to obtaining that baseball was
straight down instead of running to the aisle and back over.  So, in
one smooth motion, I swung my feet over the back railing and jumped all
the way down, (the only people near me were other ballhawks running
after the ball) landing in between the last row of seats and the 2nd to
last row.  I picked up BALL #2.

The righties for the Orioles were now taking their swings…over to left field I went.

BALL #3 was soon snagged on a bounce off the bat of O’s 3B MELVIN MORA.
Mora followed that bomb with another one, this time where I was able to snag it on the fly…BALL #4!

O’s
young slugger ADAM JONES soon began to put on a little hitting
display.  One went way up behind me and to the right.  I sprinted up
the aisle, flying through the sea of seats.
BALL #5 was lying underneath a seat and was barehanded.

RULE #51:  NEVER use your glove to pick up a ball that is no longer in motion.

Before
the O’s portion of BP concluded, underachiever TY WIGGINTON lifted one
in my direction.  I ran down about 4 rows, bolted over about 3 seats
and caught it on the fly for BALL #6.

Bring out the Braves.

The big boppers for the Braves were hitting 1st, so, I headed back over to the right field standing room only section.

After about 10 minutes of no Chipper Jones bombs, Braves catcher BRIAN
MCCANN took his turn.  It didn’t take McCann long to lift one up onto
the flag court.

I ran forward and made a jumping catch over everyone else for BALL #7.

The standing room only section was crowded.  It was every man for himself.

BALL #8 was hit to my left toward the foul pole.  I sprinted over to
the spot I figured it would land.  I was about 15-20 feet from the
brick wall down the right field line.

On the run and jumping off my left foot, I made a nice grab over about 4 other ballhawks.

It felt good.  I had struggled with the weirdest fortune the previous two days.

It felt good to shine.

After BP, I went over to watch young pitching phenom Tommy Hanson go through his warmup… 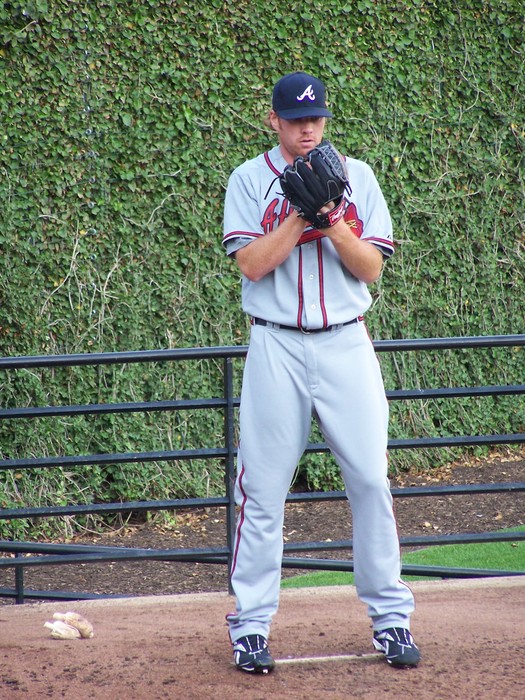 For the game, this was my view straight ahead… 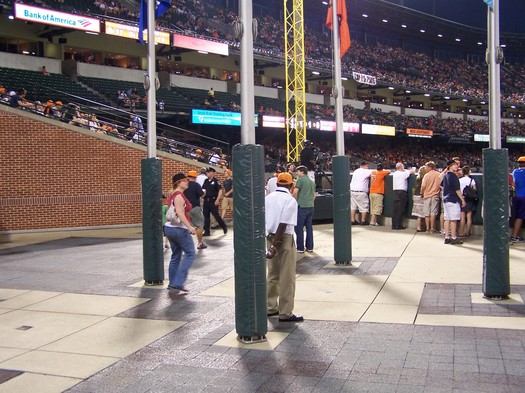 Finally, to my right…

…everyone crowds the front, potentially leaving the game home runs for me.

…and glove.  I stood in front of that flag pole for nearly the entire
game.  If a homerun was coming, it was mine.  Confident?  Yes.

But, it wasn’t meant to be.

After the game, Home plate umpire MIKE REILLY tossed me a game ball (BALL #9) near the umpire’s exit.

Take a closer look at the ump ball…

…do you see that circular residue?  It looks like a sticker was on the ball at one point.
I’ve never seen this before…any ideas??

My theory:  each major league baseball comes from the factory
individually wrapped in a piece of tissue paper.  That tissue paper
protects the baseball inside the box.  The tissue paper is secured
around the ball by a sticker to prevent it from coming off the ball.
The sticker is not supposed to touch the ball.  In this case, it may
have.

The baseballs I did NOT catch on the fly…

…as you can see the nice little scuff marks on them.

A really bad/bright picture of me taken after the game…

…by the visitors (Braves) dugout.