We had a family get-together planned, so, I decided I would attend BP and then leave to go to the party.  I rarely ever *just* attend BP, but it made sense on this day.
That’s exactly what I did.

The gates at Miller Park open 2 hrs. prior to gametime on Saturday and Sunday games that fall between Memorial Day and Labor Day.  So, at 4:05 pm, the gates opened their arms to the waiting guests.

After watching 15 minutes of bunts and singles, my favorite Brewers player, Ryan Braun, launched one high into the air.  I could tell it was a bomb, so, I turned my back to the ball and started to sprint up one of the staircases located in the left field loge bleachers.  When I reached around the 12th row, I turned around to find the ball.  A second or two later, it landed a couple rows deeper.  That’s where I gloved it on a bounce for my 1st ball on the day.
Yay for Braun…he’s the real deal.

When the Astros came out to hit, ‘Stros’ bullpen catcher Strech Suba was trying to get into the visitor’s bullpen.  For whatever reason, the gate to the bullpen was locked from the inside…with nobody around!  He struggled with the door for about 1 minute or so when I spoke up.

I said, “Hey Strech, it’s locked from the inside.”

He said, “Is anyone in there?”

After about 10 more minutes, two (2) groundskeepers came walking through the bleacher seats behind me.  They walked up to the front row and then jumped down into the bullpen to unlock the bullpen door.  First time I had ever seen that.

Strech thanked them and entered the bullpen.  By that time, the Astros had hit 4 or 5 baseballs into the bullpen (oddly enough, there were only about 8 home runs hit during the entire Astros BP – 4 or 5 of which landed in the right field bullpen).
BTW, I absolutely hate the Miller Park bullpens…but, that topic needs an entry of its own.

Strech started to pick them up when I said, “At least we know the bullpen is secure.”

Laughing, he responded, “Yeah, no kidding.”

When he picked up a baseball that was lying nearby, I asked him if there was any chance to get it from him.  Without hesitation, he tossed it up to me.  About 3 seconds later, another guy about my age asked for a ball.  Strech told him he was too old.
Ha!  Pays to kissass be nice.

Lance Berkman and Carlos Lee were hitting in the same group.  I had a decision to make.  Should I stay in right field with less competition or move to left and compete against everyone and their mother??  I decided to bank with Berkman and less competition.

It did not pay off.

Baby-face Berkman did not hit a single home run to the 2nd deck!
Carlos Lee, you ask?
He launched about 6 shots to deep left-center field.  Ahhh!!

For that, Lance gets the clown treatment.

BP was winding down, the Astros were sucking and I only had 2 baseballs. 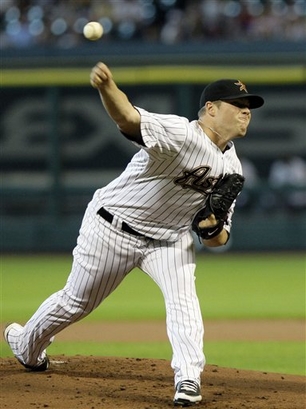 Quickly, I spotted this young pitcher shagging in left-center field…

When he fielded one nearby, I politely asked for it to be tossed up.  He turned around and lobbed it right to me for #3.  He was totally cool about it and even gave me a wave and a grin.

I’ll be rooting for him.

My 4th and final ball on the day came via the glove-trick out of the Brewers bullpen.  There was only one and I was able to knock it closer (something I rarely waste my time doing because of strict rules) and reel it up.

Four (4) balls and BP was over.  Time to head back to the party. 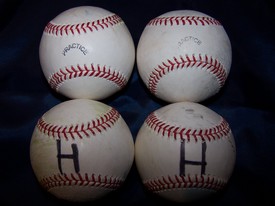 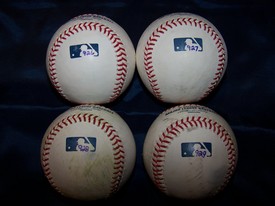 The infamous Houston Astros “H” can be seen in full-force above.

How lame is that?

PLEASE ALLOW ME TO RANT:

Take a look at the following photos…when I saw this, I wanted to throw up.  Luckily, the “prized” possessions were tucked safely behind display glass. 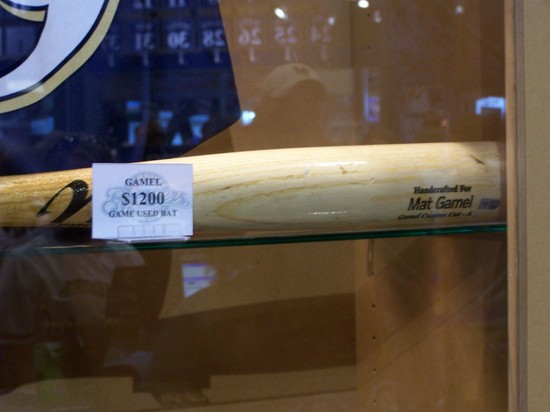 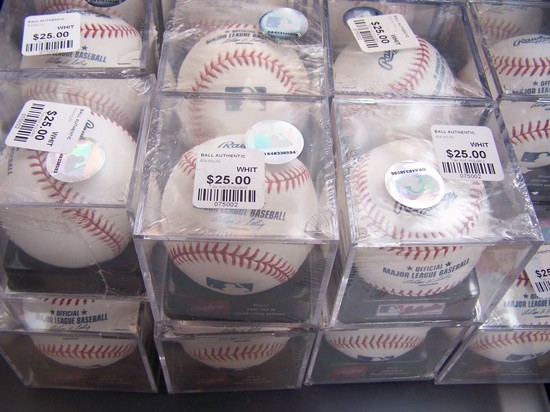 Are you kidding me??

Mat Gamel was just sent down to the minors and Billy Hall was just released!!
What are the Brewers trying to pull??  Who are they trying to fool??

I know the team needs money for starting pitching and all, but this is ridiculous.

Let’s review:
I catch a home run ball that I cherish and ask for two (2) bats in trade.  Team says no.
Team charges out the wazoo for game used items of scrubs.  I say no and so should everyone.  Craziness…absolute craziness.

Does anyone else hear the rift between teams and fans widening??
I sure as hell do.