Imagine, for a second, you get called up to the show.  It’s your first week in the big leagues and you connect for your 1st career home run.  A fan catches the ball in the bleachers.  You want the ball back for your personal collection, but the fact remains, it’s now the property of the fan.

What’s the ball worth to you?

More on this later…

My good friend “Dino” and I were going to the game together.  We were both jacked for this day.

He arrived at the house with his glove in tow.  It still had the price tag on it.  I asked him if he planned on using that glove to catch anything.  It was rigid and right off the shelf.  So, we took it down into the basement for some much needed love. 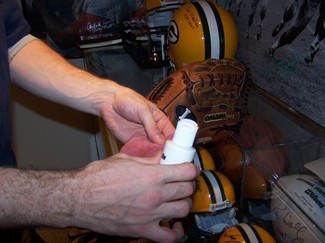 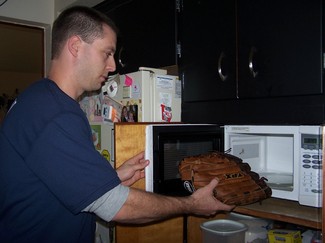 …and 40 seconds in the microwave to soften the leather.

Now, it just needed to be used.

We got to the stadium and grabbed a table out on Friday’s patio. 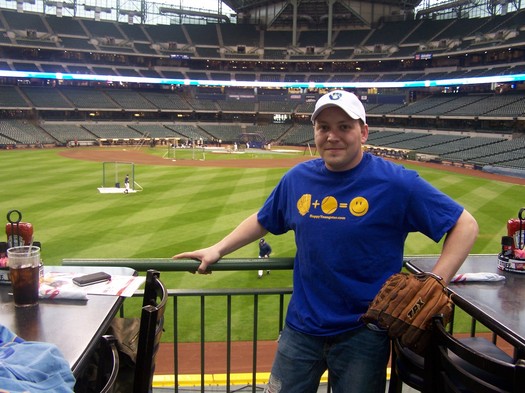 Here’s an abbreviated account of how Batting Practice went…

Ball #1 was a CARLOS CORPORAN toss-up requested in Spanish.
Ball #2 was caught on the fly off the bat of COREY HART.
Ball #3, #4, #5 and #6 were all easter eggs discovered in the left field bleachers!! Whoa!

Ball #7 was caught on the fly off the bat of BRETT CARROLL.
Ball #8 was via a JEFFREY URGELLES toss-up.

What came next changed the complexion of the evening in a big way.

Marlins prospect CHRIS COGHLAN, who had just been summoned to the major leagues the week before, stepped to the plate.

“Dino” had gone to the can and I was in the process of putting my long sleeve on due to a drop in the weather.

The ball went up, I ran over, I leaned over and made the catch.  If you look closely at the highlight, I have another ball in my right hand while I’m making the catch. (?)

The Marlins bullpen called me over and I spoke with Bullpen Coach Steve Foster.  Mr. Foster informed me that the ball was Chris Coghlan’s first career home run.  He offered me another baseball in exchange.  I respectfully declined.  With over 775 career baseballs snagged, I didn’t need another ball.  He asked me what I was looking to get.  I informed him I would like a couple of bats.  Especially, one by the player who hit the ball.  He told me, “oh, you are a big fan.  No problem, we can do that.”
I assured him that Chris Coghlan would get his home run ball.
I told him the first thing I wanted to do, before all else, was to get the baseball authenticated by major league baseball.  That way, there would be no question as to the authenticity of the ball.  I told him I would not give up the ball until it was authenticated.

He had no problem with this request.  None whatsoever.  Not at this current time (he later bashed me in the Florida media-changed his tune just a tad).

So, I went over to guest relations and spoke with a supervisor.  I requested the on-site major league baseball authenticator.  After approx. 25 minutes, an authenticator could not be located.  Someone was not doing their job.

For those who do not know, every team is SUPPOSED to have two (2) authenticators present at every major league baseball game.  Not just for the inevitable milestones (ie. 500th home run, 300th win, 3000th hit, etc.), but for the unexpected ones as well (ie. 1st career home run, hit for the cycle, unassisted triple play, etc.)

It was at this time, Media Relations Manager MARTY SEWELL approached me and began to discuss the swap.  I told him I wanted the ball authenticated for the benefit of all parties involved.  That way, there would be no question as to the authenticity of the ball.  I also informed Mr. Sewell I wanted to personally present the ball to Mr. Coghlan at the end of the game for a photo opportunity.  He told me to meet at the Marlins dugout at the end of the game.  When we both realized the ball would not be authenticated, he stated he had no problem with me going back to my seat with the home run ball.

When I got back to my seat, Marlins TV-man CRAIG MINERVINI (the only respectful Marlins employee in this whole ordeal) was in my seat interviewing my buddy “Dino.”

A few minutes later, this was the scene… 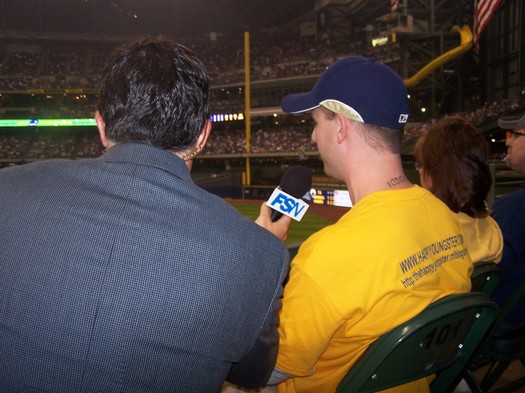 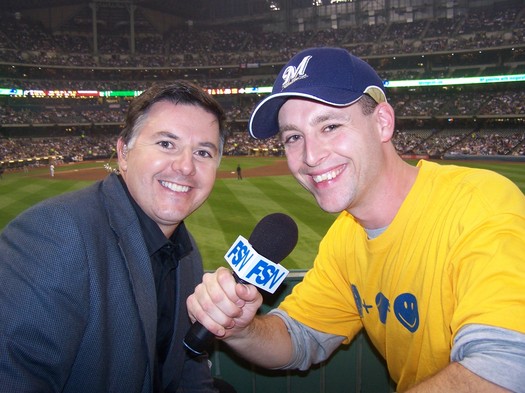 For all Florida viewers to see, I handed Craig the
handwritten requests I had decided on 30 minutes earlier.  On those two slips of paper read the following:

Mr. Minervini then held up the two slips of paper for the camera and I held up the home run ball.

Two bats.
Simple as that.
Plain English-right in front of the camera.  Documented and concrete.

One by the player who hit the home run AND one by the Marlins stud.

Is that asking too much?  Is that being unreasonable?
I just don’t see it that way. 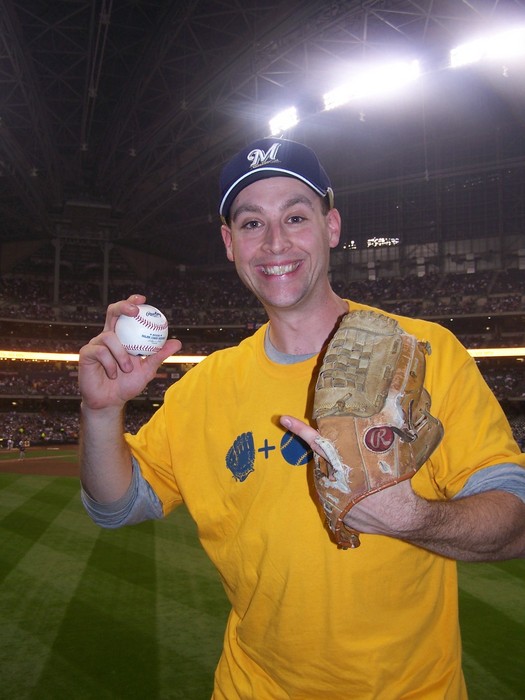 Some people choose to snag baseballs at the ballpark.  Whoopee.

Let me ask you this:
QUESTION:  Is it okay to catch a historic milestone home run and sell it at auction for $1 million dollars?

ANSWER: If that’s what it’s worth to someone, hell yeah it’s okay.

On the flip-side:
QUESTION:  Is it okay for a fan to catch a personal milestone of a little-known player and ask for two bats?

ANSWER:  If that’s what it’s worth to someone, you bet it is.

During the game, I gave out two (2) baseballs to two kids sitting in my section.  They didn’t ask.  They didn’t have gloves (that I could see).  They were just playing around and I had a few extra.

About twenty minutes later, this lovely family showed up in my section to congratulate me on my catch… 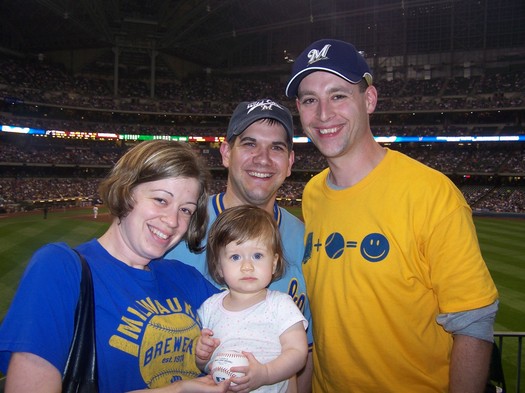 …they were so nice, I gave their daughter a baseball.  That’s Cassidy holding up her newest prize.  What a cutie!

The game couldn’t get over with soon enough.  I was itching to make the swap of the home run ball for the two bats.

To pass the time… 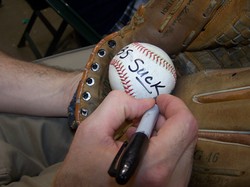 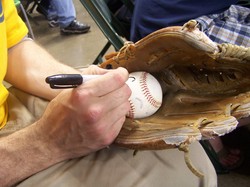 …I christened a new “CUBS SUCK” ball.  (For those who do not know, the CUBS SUCK ball is used as the throwback ball when an opposing team hits a home run to me).  I keep the real game home run ball and throw back the CUBS SUCK ball.

NOTE:  I did not throw a ball onto the field after catching Chris Coghlan’s first career homer.  I knew it was Chris’ first home run and didn’t want to get kicked out.

In around the 7th inning, I was approached by this guy… 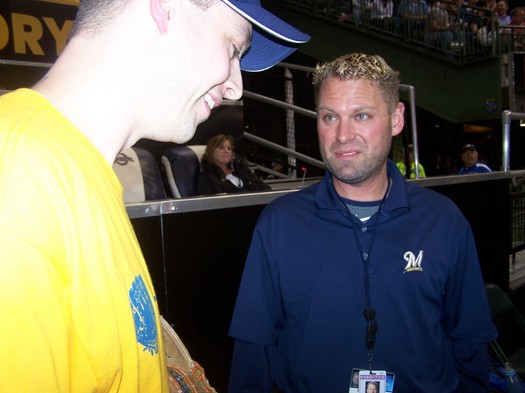 He came out to my seat with this… 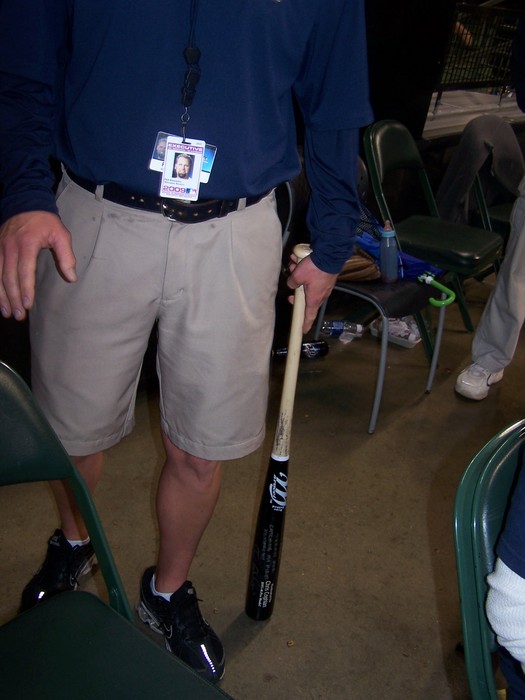 …very cool, indeed.  But, only 1/2 of my request.
I don’t blame Phil.  He was only acting at the request of the Florida Marlins.

I could sense this becoming a bigger deal than it needed to be.

Back to the story.

So, the agreement with the Florida Marlins media relations man was I would return to the Marlins dugout with the ball at the end of the game.  I did exactly that.  After being hassled by every grumpy old usher inside Miller Park, I finally made it down to the dugout after the game. 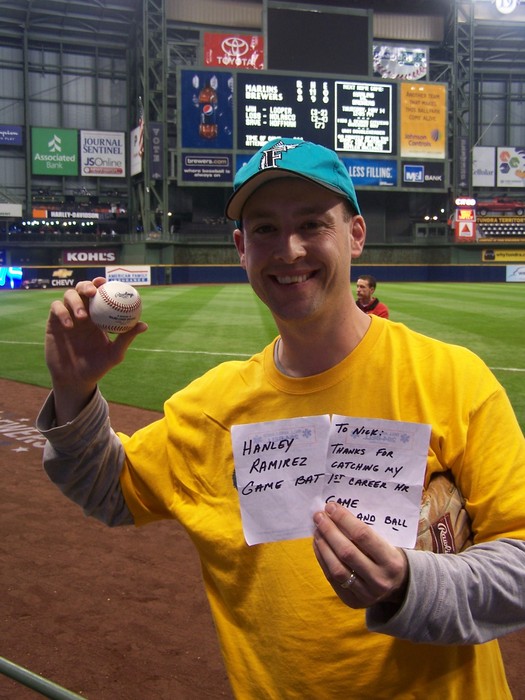 …okay, it’s no secret.  I wear the opposing team’s hats for their portion of Batting Practice to maximize my ballhawking efforts.  Call me a poseur, call me a fake…whatever.  I call it smart.

I was then greeted by this fella… 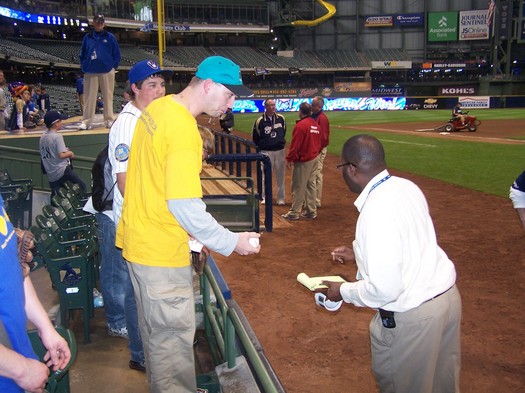 …who said he was the on-site MLB authenticator.  Where was he before when I needed him?

Next, the second guy to greet me… 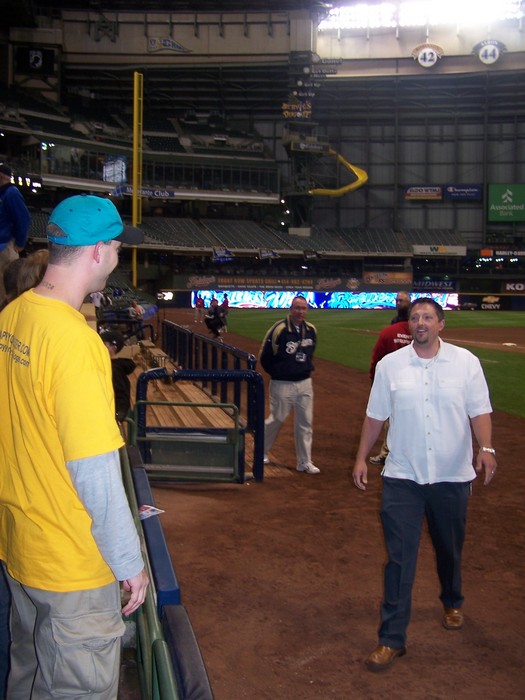 Marty was all smiles at first.  Until he opened his mouth.
His first words, you ask??

“You better not be jerking us around.”
“Is this the real home run ball?”
“Why did you have another ball in your hand when you made the catch?”
“This isn’t the home run ball.”

My response, you ask?

I didn’t realize it until I saw the replay.
Either way you look at it, I was being accused of swapping out the baseballs.  Real classy on their part.  That’s NOT how you start a negotiation with someone. 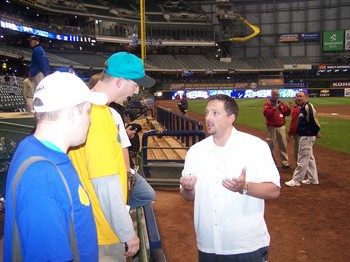 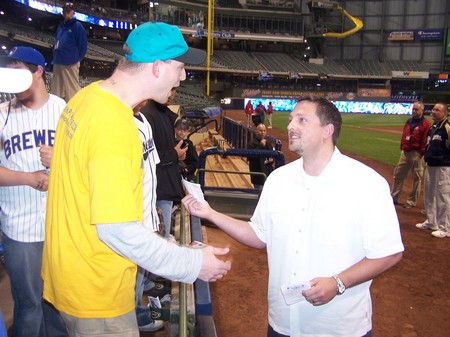 I was being accused of swapping the ball EVEN AFTER I was the one who insisted on preserving its integrity by getting the damn thing authenticated.

This was the same guy that said it was perfectly okay to return to my seat still in possession of the ball.  Now he was changing his tune.

This would not be the first time the Marlins contradicted themselves.

Mr. Sewell informed me I could not have a Hanley Ramirez bat because that was not a part of the deal.

Hello?  Anyone home?  What deal?
The only deal I recall was the one I personally displayed for your Marlins TV cameras about 2 hours earlier. 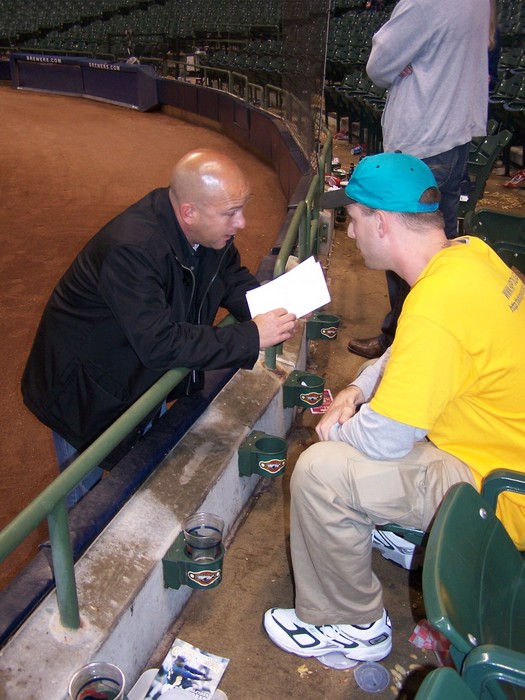 After they made a stink about the Ramirez bat, I let the idea go.

IT WAS AT THIS TIME, that I asked for tickets to the Marlins/Brewers (NOT YANKEES) series at their stadium in Miami June 1 – June 4 in the place of the Hanley Ramirez bat.

The hero of the day, the almighty ballplayer, the noble sultan of swing-CHRIS COGHLAN himself, finally, made his appearance.

The first thing he said to me, you ask??

“You gonna give me my ball or what?”

Are you kidding me?
I think this kid needs to go back to that rookie orientation camp where players get taught how to handle the media and the fans.

He half-heartedly posed for this picture… 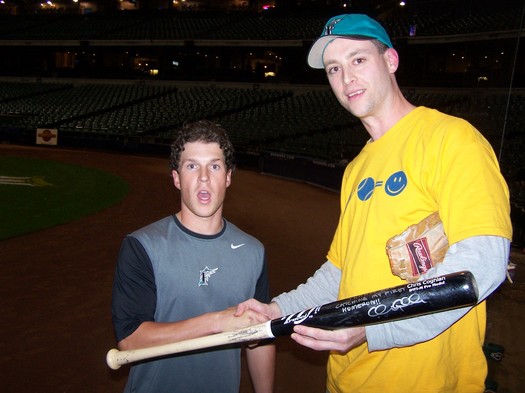 …I’m not asking to be your best friend.  Just act like you give a crap.

What’s that thing he’s doing with his mouth??

He grabbed his home run ball and stormed off without saying a word.  Then, he turned back toward me and said, “why y’all gotta hold my home run ball for ransom?”

Asking for two (2) bats, getting turned down, agreeing to one (1) bat and some tickets that I’ll never see is holding a ball for ransom?

You have to be kidding, pal.

I told him asking for two (2) bats is not unreasonable and that I work an honest job for a living.
His response?

Apparently, the AP interviewed Mr. Coghlan about the ordeal.  He told them, “the guy told me he travels around and catches home run balls and holds them for ransom.  He really didn’t say that, but it seems that way.”

Huh?  Your credibility just went right out the window, sir.

I guess I just don’t get it.

After giving my contact information to Dr. Jeffrey Fishbein for the Marlins/Brewers tickets that I’ll never see, my friend and I left the stadium.

According to the Miami Herald,

Coghlan said the man demanded an autographed baseball by Coghlan, a
personalized Coghlan bat, an autographed Ramirez bat and — to top it
all off — tickets to the Yankees/Marlins series in South Florida in
June. He also wanted his photograph taken with Coghlan.  If he had been more respectful about it, I would have given him anything he wanted, Coghlan said.

Now, let’s go back to my original question:

WHAT WOULD YOU GIVE THE FAN THAT CAUGHT YOUR FIRST CAREER HOME RUN BALL??

Would you act thankful?  Would two (2) bats be asking too much?

It still amazes me how many professional athlete apologists are out there.
Pro athletes can say whatever they want and the fans will believe them.  If a fan dares to stand up for himself, people bash him up and down.

CLICK HERE for the interview in my own words.
Take the 10 minutes to listen to it-then comment.

I must warn you in advance, if you resort to name-calling or threats, additional measures will be taken and your comments will be investigated/reported/deleted.

You can comment on this topic without lowering yourself to such measures.