This game was to be televised on ESPN as the Sunday night game of the week.

I hurried to the ballpark for Batting Practice.  Before I entered the stadium, I left my extra ticket at the will call window for a fellow Milwaukee ballhawk named Mike.  I affectionately refer to him as “Big Mike.”

“Big Mike” has been ballhawking the Milwaukee scene since 1987-the year he snagged his first career in-game home run baseball.  Mike’s not as nimble as he once was, but, I believe he has 26 career game home runs snagged.  Not too shabby.

Here was my line entering the stadium…

This gate is somewhat of an unknown.  A well kept secret, if you will.  It’s located on the  back-side of the stadium.  It’s called the Party Patio.  It’s an actual ticketed entrance all season long.  If you’re in a hurry to get in like I am, use this entrance and save yourself some valuable BP time.

I got BP off with a bang by using the glove trick in the visitor’s bullpen for BASEBALL #1.

The Cubs first group of hitters weren’t doing much and I was getting antsy in the pantsy.  The 2nd group took their cuts including Cubs LF Alfonso Soriano.  Based on past experience, I knew exactly where Soriano would hit them.  Boy, was I right.

I established my spot and waited…it only took 1 minute before ALFONSO SORIANO jacked one that I snagged on the bounce for BASEBALL #2.
Rarely, do players jack back-to-back home runs in BP to the same spot.  But, it happened this day.  As I was running up to claim #2, BASEBALL #3 landed 15 feet from me.  I think I was a little off my game but it may have been Soriano just being a stud.  I grabbed that one on the bounce, too.
Five minutes later, ALFONSO SORIANO was at it again.  Another swing of the bat and the ball was coming.  I camped underneath it and caught it on the fly for BASEBALL #4.  Before Mr. Soriano was finished, I managed to catch BASEBALL #5 on the fly in the same fashion in nearly the same location.  I always say, “it pays to do your homework.”

The remaining Cubs hitters decided they didn’t want to donate anymore baseballs to the cause.  BP was over.

After BP, a gentleman approached me and asked me if I would be willing to sell one of my baseballs.  I asked him if he had any kids.  He said he had a son celebrating a birthday today.  I told him that if he brought his son over, he could have a baseball for free.  He told me he would return.

About 10 minutes later, the man returned with his teenage son and a younger boy.  I picked out one of the nicer baseballs I had snagged that day and handed it over to the boy.  I wished him a happy birthday and took the following picture… 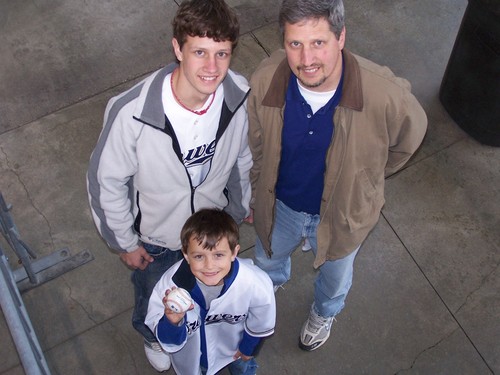 Birthday Boy Braeden celebrating his 8th birthday at the ballpark with his older brother and father.  I love seeing families spending quality time together at the yard.

I met up with “Big Mike” and we headed to the concessions stand for a little pre-game meal.  Since I had provided the ticket, Mike was providing the food.  I ordered the chorizo…a new phenomenon at Miller Park.

Here’s Mike at the concessions stand.  If you come to Miller Park and run into this guy, you have to stop and say hi.  Tell him you know The Happy Youngster!
He’s a riot… 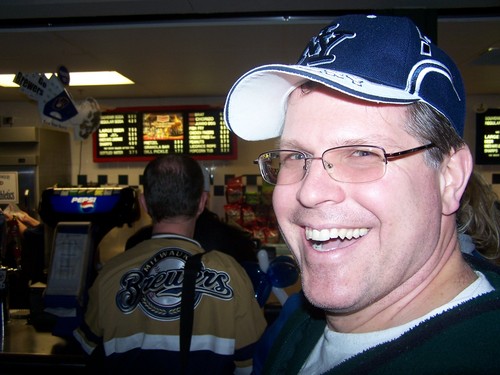 Look at these freakin’ prices…

I wandered up to the 400 level to take a few pictures.
Here’s a view of the field from the 400 level of the Terrace Reserved seats…

I usually sit just to the right field side of the hitter’s eye.  Provides me some home run ball opportunities from time to time.

On the way to my seats, these guys were walking in front of me… 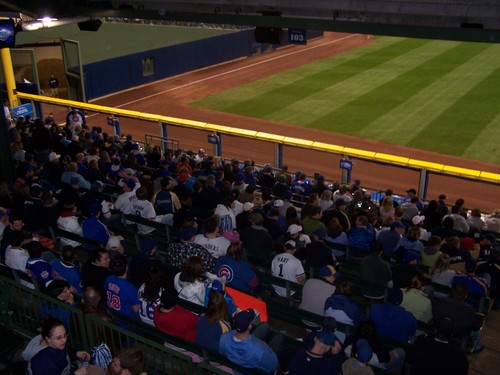 A huge overhang prevents many of the home runs from landing here.  The ones that do make it on the lower level are liners and squeakers in the first 7 rows.

Here’s a picture of Ballhawk Shawn… 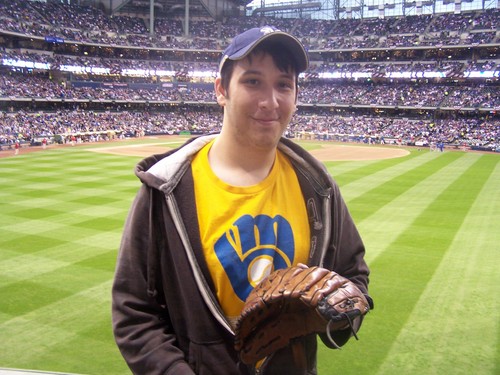 Shawn is a charter member of our BALLHAWK LEAGUE and a great baseball fan here in Milwaukee.  Stop by Shawn’s blog if you get the chance-he knows baseball.

It was now game time so I settled into my seat.

In the 4th inning, Brewers RF Corey Hart stepped to the plate.
You may recall on Friday the 10th of April (Brewers home opener), Corey Hart hit a home run 15 feet over my head that landed on a set of stairs.

Well, Corey Hart did it again.  This time, he hit it about 5 feet over my head.

The scoop:
I’m sitting in the front row and it’s coming my way (opposite-field).  I know it’s hit hard so I run up the first set of stairs.  I turn around to find the ball.  When I locate it in the air, I realize it’s still going to be over my head, so, I run up another small set of stairs.  By the time it lands, I’m 5 feet away from it.  Too many stairs to climb in too little time.  It takes an awkward bounce off a guy’s arm and falls to the concourse below (about a 7-10 foot drop).  I’m about to jump over the railing and claim it when two guys just so happened to be walking by and see it bounce around in a small nook.  One of the passers-by picks it up effortlessly and takes off running.   Dammit!!  I pull myself back on the right side of the railing…commence kicking self in rear.  That’s the second time in three days Corey Hart hit in to my section and over my head.
I’ve played that home run over in my head about 50 times.  I’ve asked myself tons of questions…

I’m convinced that narrowly missing game home runs makes you a better ballhawk over time.  You learn from little mistakes, little hesitations, etc.  I play it over in my head as if I get a “do-over” or something.  Maybe the next time I’ll do it better.  Oh well.

Here’s a picture of where the Corey Hart homer would have landed…if not for the guy in the hat and green coat.  I was about 5 feet away when he stuck his arm out to try to catch it… 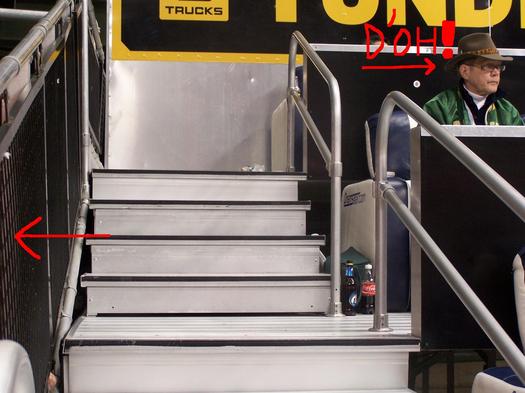 There’s a lot of “what-ifs” here.  If he hadn’t stuck his arm out I would have most likely snagged it on the 1st bounce.  Oh well, I’ll get it next time.

It was Easter Sunday, so this picture taken from near my seat is appropriate… 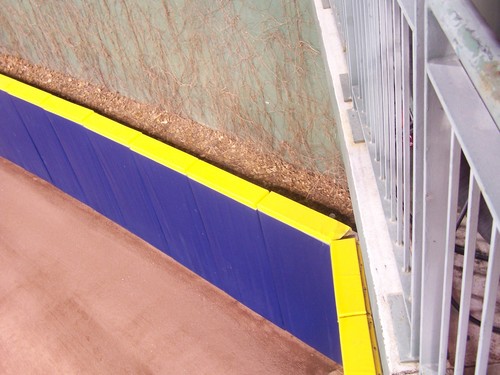 There it is.  Almost looks like it has a larger commemorative logo on it…hmm.

In the top of the 9th inning, I relocated to the 6th row by the Cubs dugout for an ump ball.
Meanwhile, I took the following pics from my new seat…

See the guy seated on the left side of the photo on the aisle wearing the gray hooded sweatshirt?

That’s former DUKE University basketball standout J.J. REDICK.  It turns out, the Orlando Magic were in town to play the Milwaukee Bucks the following night.  He and a few of his Magic teammates (including Jameer Nelson and Marcin Gortat) were taking in the Brewers game from the best seats in the house.

I always keep a game ball in my bag for these exact situations.

After home plate umpire Angel Hernandez dissed me and the game had ended, I politely asked Mr. Redick to sign the ball pictured below… 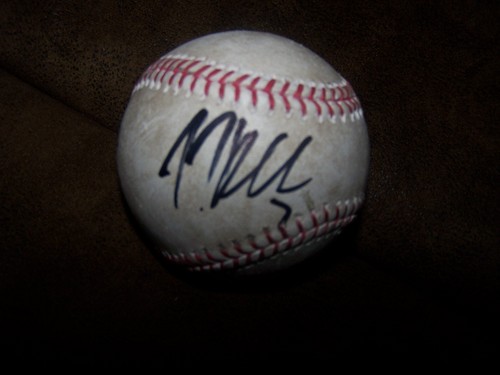 His pro career hasn’t amounted to much, but, collegiately-he was one of the best.

Finals for the day…