I got off to an early start.  I left my hotel around 8am and headed to Maryvale Baseball Park.  I arrived at the park around 8:30 and started wandering around.  Only a few of the big leaguers were out in the cages.  Fielder, Gwynn, Jr., Rottino, Hall, Sveum and Yount.  There was no potential for snagging so I wandered some more.

I found the Single A Brewers team hitting on one of the side fields, so, I set up camp.

BASEBALL #1
A young player by the name of Rapoza #55 tossed one over the fence to me.  Upon further inspection, it was a Florida State League baseball.  Very cool. 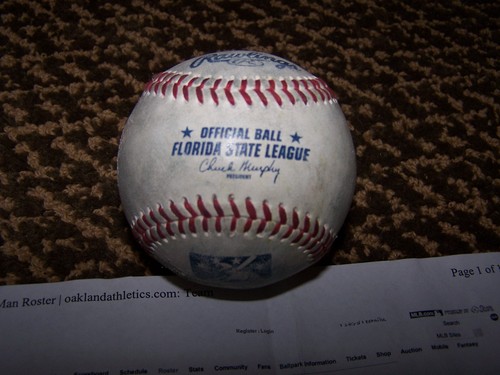 Here’s a picture of the Florida State League baseball.

BASEBALL #2
About 20 minutes later, I spotted #14 PASCUAL, a minor leaguer for the Brewers.  So, I yelled, “dame la bolla, por favor, senor!”  He snapped his head in my direction and flashed a toothy grin.  Between us, was a high netted fence that prevents baseballs from leaving the park in left field.  Behind the fence is a parking lot, so, you can imagine how many windshields this net saves. But, it was now standing between me and baseball #2.  So, I pointed over the top of this 80 foot fence.  I then held up my glove for #14 PASCUAL.  He looked up and fired it high into the sky.  I took a few steps back, reaching the end of the sidewalk and the start of the curb and caught it.  “Gracias!”  To both #14 and baseball snagger Zack Hample for his bi-lingual snagging tactics.

It’s hard to see, but the baseball above (#2) was an Official Minor League Baseball with President Pat O’Conner’s stamped signature.

Gates were opening soon…time to buy my lawn ticket. 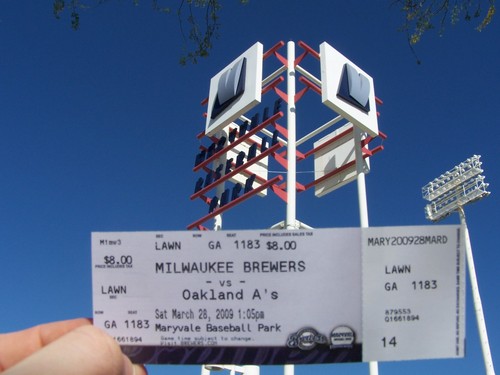 $8.00 for admission to a major league event-still such a bargain.

BASEBALLS #3 and #4
The stadium gates opened @11 am and I raced to the left field berm to claim my turf.  The first Brewers group to hit was FIELDER/HARDY/WEEKS/KENDALL.  The first 3 are BP studs.  Prince jacked one to deep center and I took off after it.  I chased it down on a bounce when I heard another one land about 100 feet away.  I ran toward the sound and gloved it on a high 1st bounce.  Two baseballs in 10 seconds!!

BASEBALL #5
A few minutes later, I gloved one on the fly off the bat of J.J. Hardy.

It should be noted that there were a lot of people present with baseball gloves.

BASEBALL #6
A few minutes later, Rickie Weeks hit a smash that I gloved on the fly.

BASEBALL #7
J.J. Hardy hit another one I gloved on the fly.

BASEBALL #8
The next group to hit included Bill Hall.  Hall usually is a BP stud.  Not this day.  Although, he did manage to hit one in my direction.  I took off after it and caught that one on the fly, too!

Upon closer inspection of the Bill Hall BP homer, I noticed it was an ’08 All Star game baseball.  Cool stuff. 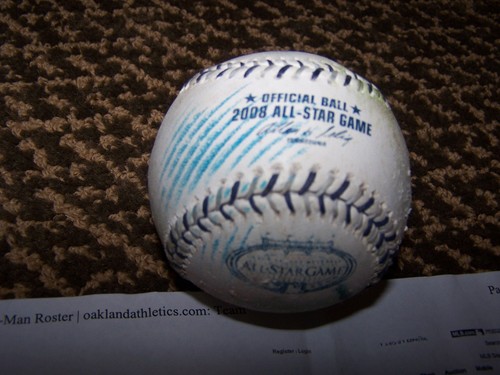 The 2008 All Star baseball used in Brewers BP at Maryvale Park 3-28-09.  Ball was hit by Brewers 3B Bill Hall and caught on the fly.  That unique blue mark was most likely from the hitter’s eye at Maryvale Park.  (They have a blue metal backstop-this baseball must have been hit by another player beforehand).

The rest of the Milwaukee Brewers hitters did their best Pittsburgh Pirates imitation and failed to reach the warning track.

I had some down time, so I wandered around and took some pictures. 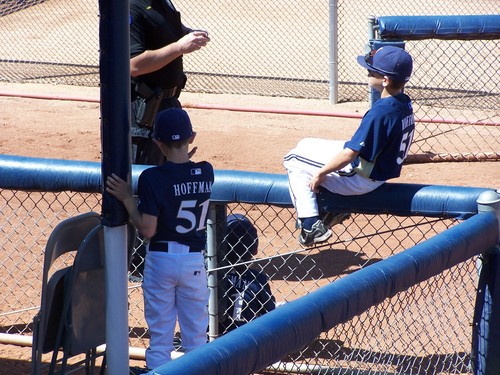 Here’s a picture of Trevor Hoffman’s little clan. I didn’t see Trevor once on my trip due to his injury.

Here’s my view of the game.  A very uneventful game…I might add.

BASEBALL #9
I decided to go down to the box seats for the 9th inning and a different view.  While above the Brewers dugout, a baseball came popping over the dugout roof.  I was in the 2nd row and reached out my hand and claimed it before it hit the ground.

I ended up snagging 9 baseballs this day (3/28/09).  In order (counter-clockwise).  Also shown is my roster note sheet (a must for any ballhawk).